The Sitefinity team have released the start of a new Certification process. Currently the course and exam are free until August this year. There is just the one at present, Basic Developer, so I decided I would take it and see how it compared to the last Certification exam from Sitefinity.

I did the Sitefinity Certification exam from 3 years ago. From memory I didn't think it was a great exam. It reminded me of the first Microsoft Exams. I personally thought they were more about getting some branding out there and collecting a bit of money.

This exam was a lot better in that you have to know about developing in Sitefinity to pass it and I felt it was a better indication of someones experience. This first exam is named Basic and so I would expect more qualification levels will be coming out after the feedback of this exam.

Pretty easy just go to wbt.progress.com, self register then follow your nose.

The training videos I thought were good. They run through Sitefinity and its features quite well. It's targeted at experienced Web people so doesn't waste time explaining the mundane. If you already know Sitefinity then I would suggest playing the videos at double speed. It'll get you through faster over all the stuff you already know and if you do come across something new you can slow it down at that point.

Though the course is Basic Developers the videos are primarily about Sitefinity while it is running. For me I have a new employee. He's probably smarter than me when it comes coding but these videos will be perfect for getting him up to speed with the Sitefinity product.

Accompanying each video are links to online documentation where you get to read more about the coding side of things.

The exam is multi choice questions, 75 of them and you need 75% correct to pass. Overall a good experience taking it. I decided to take it before I had to go to a meeting. I had 2 hours and if I did fail I can take the exam again. (After a 2 week stand down period) So pressure was off.

One thing that I didn't notice or wasn't warned about, (or if I was I missed it), is that you can not go back and change your answers. So I kicked off but came to a question where I answered it a bit too fast but couldn't go back to double check. I did this about 3 times! Doh!.

The questions where mostly well written. I thought the format of the questions could have been laid out better for improved readability and some better words used to avoid confusion but minor things at the end of the day.

There was one question that was a total balls-up. The question and answers were totally different subjects. It was impossible to know the right answer. I would have reported it but didn't note the number down and couldn't go back to find it. But apart from that one I would say that there were only 6 questions which I either didn't understand the question correctly or didn't understand the answers correctly. (Yes, it is possible I just had no idea.)

If you have a 5 or 6 Sitefinity projects under your belt and feel comfortable creating different solutions. (ie you haven't just created 6 projects all the exact same way) then you won't have trouble passing this exam. I would say run through through the training videos still. (Double speed).

If you are newer to Sitefinity then go through the videos and the related training links.

And be well aware of the differences between MVC and Web Forms development. You need to be able to spot that the example is a Web Form implementation of a Widget. The questions don't start with, "You are developing a Web Forms widget for ...", to give you a hint.

Remember, the training and exam are free. You can resit the exam if you fail. So put aside some time and have a go.

And yes, I passed. 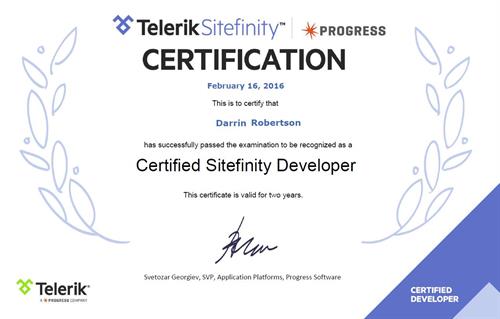